This recipe only has four ingredients to worry about!

This is a fun recipe that is perfect for the Halloween season.

I like how easy this is to make too!

Did you try my recipe for How to make Mummy Oreo Cookies?

That recipe is similar to this one as they both are based upon decorating a baked goodie as something fun for Halloween.
This recipe is made with four simple ingredients that include a baked brownie.

This recipe calls for using already baked brownies.
If you are going to bake brownies to use in this recipe, I suggest using an individual brownie pan to make your brownies all of equal size and for their edges to be baked.

There are three parts to making this Halloween ghost brownies recipe.

The brownies should be cooled entirely before using them in this recipe.
You may want to make the brownies a day ahead of adding the ghosts.

Here are some tips for making Halloween marshmallow ghost brownies.

Using store-bought brownies makes this recipe even easier to make. Day old brownies works great because they are less soft than the fresh baked variety.

Some more helpful tips for you.

Making a standard white ghost on top of a brownie is a standard and fun way to make this treat.
However, there are ways to make personalize them too.

Try one of these ideas for personalizing your brownies.

Making this recipe sugar free or low in sugar is as easy as using sugar free ingredients instead of the regular ones. You may need to make adjustments as needed.

Here are some sugar free alternatives that you can try using.

How to make these Spooky Brownies

Step 1. Bake brownies as indicated on the packaging. Allow for the brownies to fully cool before removing them from the pan. After the brownies have fully cooled place the brownies in the refrigerator for at least 30 minutes or freezer for for 10. Cut the brownies into evenly sized pieces. If you are using already made brownies that have been cooled and cut, skip this step.

Step 2. Line a rimmed baking sheet with parchment paper. Then place the individual brownies onto the baking sheet, leaving some room between each brownie. Place a marshmallow on top of each of the brownies.

Step 3. In a microwave-safe bowl, melt the white chocolate, stopping every 30 seconds to stir. Then use a spoon to drizzle the melted white chocolate over each of the marshmallows and brownies. Place the baking sheet with brownies in the refrigerator for ten minutes to harden.

Step 4. Place the chocolate chips in a microwave safe baggie and heat (most name brands should work) and heat the bag in the microwave for 45 seconds. Tip: place the bag on a microwave-safe plate. Remove the bag and massage it with your hand to help melt all of the chocolate. If not fully melted, heat for an additional 20 seconds, and massage again.

Snip the opposite corner off the baggie, and insert the piping tip, and move chocolate to that side of the baggie.

Gently squeeze chocolate through the piping tip to make one dot for each of the eyes, and an oval for the mouth.

Step 5. Allow the ghost brownies to cool before serving. 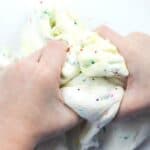 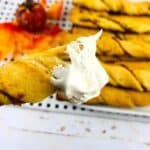 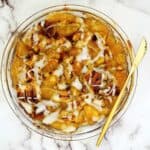 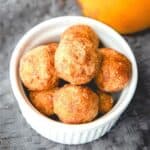